As many readers will already know, my personal sporting success came long before I developed an interest in endurance sports and running in particular. For a number of years I played Rugby Union full-time: a sport where we as players become somewhat obsessed with developing strength and power.

Now with the benefit of hindsight, I can see that this has probably moulded the terminology I use today when talking with endurance athletes about their own rehab or training.

I often catch myself talking to runners about the need for them to strengthen around the hips, for example.

But do I really mean ‘strengthen‘? Upon reflection – sometimes yes, but more often no!

Basic strength is of course an important component of fitness for any athlete. But in truth I don’t meet that many runners or triathletes who truly display strength deficits when testing muscle groups in isolation (unless previous injury has been a contributing factor).

N.B: I am quite sure however that mine is a somewhat skewed view of the world, given that most of the athletes I work with fall in the keen amateur to pro bracket, rather than beginners. Often beginners do indeed need to work on developing basic general strength for running.

What I do often see however, even in the most high performing of athletes, is a perhaps surprising lack of neuromuscular control, particularly proximally around the lumbro-pelvic and hip regions.

These athletes normally don’t test as being particularly weak per se, but are often let down biomechanically by their ability to control areas such as the hip and pelvis during functional movements – running, jumping, hopping etc…

Video Example: Here’s a quick video of a world class female athlete who I would describe as being exceptionally strong in general terms, and in terms of her sport, but in need of improvement in stability when loading dynamically on one leg – as per running.

Currently there is a fair amount of research being conducted around the hot topic of Patellofemoral Pain in runners, particularly looking at the biomechanical risk factors and implications for rehab / prevention.

Rather than ripping off his work and reposting here, I’d suggest heading over to the following great post by my friend and colleague Dr Christian Barton to check out the latest thinking in how muscular strength deficits around the hip are now thought to be less of a specific risk factor to Patellofemoral Pain in runners. Strength deficits observed in these runners are perhaps more a result of injury and prolonged altered movement patterns due to pain.

However neuromuscular control is of course different to strength itself.

Years ago, as a younger coach I was once given some great advice by a coach who had been around the block a few times. He told me to:

“Train the movement, not the muscle…”

In this context, this is exactly what we need to be thinking as coaches!

I use Patellofemoral Pain as an example, simply because this is where a lot of research is currently focused. It is becoming increasingly evident that muscular weakness isn’t as much of a predisposing factor to this type of injury as you might think.

Instead, it appears that injury risk may be more related to an athlete’s ability to control / maintain optimal knee alignment in weight bearing. This patellofemoral alignment is of course driven from top-down from the hip and bottom-up from the foot and ankle.

Thinking about the hip component of this: getting an athlete to working on strengthening the external rotators / adductors (glutes) in isolation is unlikely to affect a change in the control of this unwanted loading pattern, while movement re-training is more effective in correcting these patterns.

I should perhaps stop defaulting to saying: “we need to strengthen your hips“.

Instead I should probably be saying: “…improve your dynamic control and stability around the hips“.

That in itself is a coaching habit. I’ll get there eventually!!

We even have a download called “Stronger Hips for Pain Free Knees“. Perhaps this should really be renamed:

…Especially given that’s what most of the exercises really work on developing.

Doesn’t exactly trip off the tongue does it?! 😉

The bottom line is that I actually don’t think there is ever a downside to any runner working on improving general strength.

However, my take home point is not to ignore your dynamic stability / neuromuscular control exercises.

Here’s a starter for you: 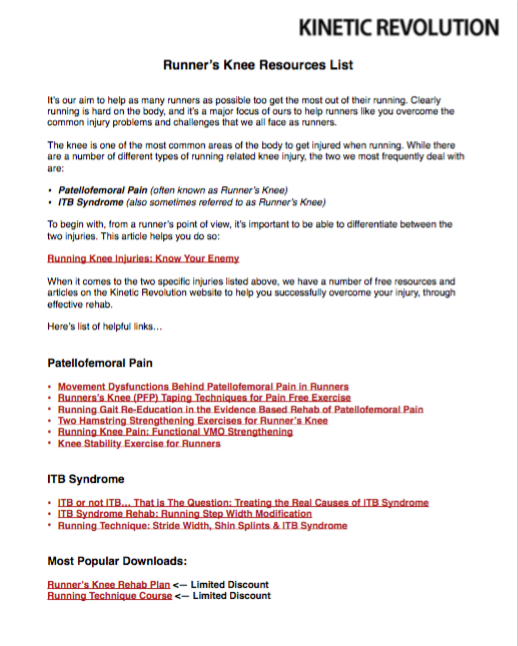 Home » Blog » Running Injuries » Train the Movement, Not the Muscle

Having trained as a sports rehabilitation therapist, James now works exclusively with distance runners, helping athletes from beginner to pro to run stronger and pain free. Check out James' marathon training plan for beginners [PDF]. Formerly a professional rugby player, James’ route into endurance sports coaching hasn’t exactly been conventional. His transition into distance running has taught him what his body is capable of, a process which is ongoing! Read more...

Which of These Two Runners Do You Most Resemble?